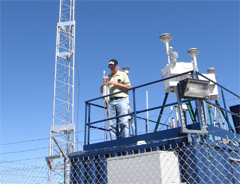 The OCEC laboratory instrument at Sunset Laboratory is used to analyze aerosol particles collected on quartz-fiber filters for both organic carbon and elemental carbon (OCEC). As with all current OCEC procedures, the analysis is method- defined. It was also designed to address some of the specific problems observed in other methods in assigning carbon to either the organic or elemental fraction. By careful system control and continuous monitoring of the optical absorbance of the sample during analysis, this method is able to both prevent any undesired oxidation of original elemental carbon and make corrections for the inevitable generation of carbon char produced by the pyrolitic conversion of organics into elemental carbon.

The OCEC instrument is described in the literature: M. E. Birch and R. A. Cary (1996). “Elemental Carbon-Based Method for Monitoring Occupational Exposures to Particulate Diesel Exhaust.” Aerosol Science and Technology 25, 221-241. A brief description of the procedure follows.

In a completely oxygen-free helium atmosphere, the sample is heated in four increasing temperature steps to remove all organic carbon on the filter. The transition from the third temperature to the fourth (from 500 °C to 700 °C) will quickly decompose inorganic carbonates, producing a sharp, characteristic peak. During this first phase there are usually some organic compounds that are pyrolitically converted to elemental carbon. As much as 30% of the organics may be pyrolitically converted to elemental carbon. This pyrolitic conversion is continuously monitored by measuring the transmission of a laser through the filter. As the organic compounds are vaporized, they are immediately oxidized to carbon dioxide in an oxidizer oven which follows the sample oven. The flow of helium, containing the carbon dioxide, then goes to a methanator oven where the CO2 is reduced to methane. The methane, then, is detected by a flame ionization detector (FID).

After the sample oven is cooled to 525 °C, the pure helium eluent is switched to a 2% oxygen/helium mixture in the sample oven. Then the sample oven temperature is stepped up to 850 °C. During this phase, both the original elemental carbon and that produced by the pyrolysis of organics during the first phase (Part A) are oxidized to carbon dioxide due to the presence of oxygen in the eluent. The carbon dioxide, as in Part A, is then converted to methane and detected by the FID. As previously stated, the darkness of the filter is continuously monitored throughout all stages of the analysis.

After all carbon has been oxidized from the sample, a known volume and concentration of methane is injected into the sample oven. Thus, each sample is calibrated to a known quantity of carbon. This also provides a means of checking the operation of the instrument. Based on the FID response and laser transmission data, the quantities of organic and elemental carbon are calculated for the sample. Thermograms are displayed graphically.

Samples should be collected on quartz-fiber filters (e.g., Pallflex QAO-UP, Micro Filtration Systems QR100, etc.). Either 47mm or 37mm diameter filters can be used, as well as comparable sized sections of Hi-Vol filters. The punch used for the analysis is 1.0 cm by 1.5 cm in size. Sufficient sample must be sent to allow for at least one repeat if necessary. In order to take advantage of the low detection limits of this method, the filters must be pre-fired in air (700 °C for about one hour) in order to remove any residual carbon contamination. We will analyze samples collected on glass-fiber filters, but there is an additional charge added to the base price because extra precautions must be taken to prevent the molten glass from coming into contact with the internal quartz oven. Furthermore, there may be small systematic errors in reported analyses for glass filters. These errors may occur because the final temperature increment in Part A (see above) with helium must be lowered to prevent melting the glass while the absorbance is being measured. This may lead to elevated EC values and lower OC values. Please consult with us before sending samples collected on glass filters!!

The precision of the Sunset Laboratory method of OC/EC analysis, measured as a relative standard deviation, typically falls into the 4-6% range for samples that are in the concentration ranges specified above. This relative standard deviation range applies to the OC/EC speciation values as well as to the total carbon. For sample sets of more than 10 samples, Sunset Laboratory will run duplicate analyses on about 10% of the samples at no extra charge to verify this precision. Note that these standard deviations also account for any variation in the sample density on the surface of the filter and any instrumental variation. The accuracy of this method for measuring total carbon content can be ascertained by analyzing a known quantity of carbon. Sunset Laboratory routinely checks the accuracy of the OC/EC as part of the quality assurance program. Known quantities of sucrose and/or other organic compounds are applied to blank quartz fiber filters. The results of the OC/EC analysis of these filters are then compared to the known presence of OC and EC. Relative standard deviations are less than 5%. It is difficult to quantify the accuracy of the method for determining OC and EC species. Several experiments, however, have created mixtures of known quantities of OC and EC which act as real-world samples during the analysis by pyrolizing a fraction of the OC. These experiments give the predicted value for the speciation within 5-10%, depending on the relative quantities of OC and EC on the filter. Several method intercomparison studies have also yielded similar standard deviations.

The majority of aerosol samples collected using a size-segregation inlet (less than 10 microns) are free of interference problems. However, there are exceptions. Samples that contain inorganic carbonate particulate matter may result from regional geology or certain types of industry. These interferences are usually eliminated by a size-segregation inlet, but some infiltration typically will occur. An upper limit for this type of carbon can be found, since the temperature steps during the first phase of the analysis have been selected to allow inorganic carbonate to appear as a unique peak in the analysis.

The presence of colored inorganic compounds, the most common being iron oxide, does not usually cause problems, as long as there are not heavy deposits because the absorbance of the red laser light is usually small compared to the absorbance of any EC present and because the absorbance almost always remains constant during the analysis. Colored inorganics have been a problem when samples were collected near copper smelters or other ore-producing industries. Some of these samples have formed black oxides during the oxygen phase of the analysis. If you suspect such a possibility please check with us first.

Colored organic materials are common, especially in areas impacted by the burning of biogenic material. Again, these materials have an absorbance coefficient for the red light which is small compared to the absorbance of EC. So errors due to the presence of such organic material are minimal. In samples where the amount of EC is small and the amount of absorbing organics is large, it is found that 1-2% of the organic carbon can be incorrectly assigned to the EC fraction. It has been shown that the presence of non-absorbing inorganics, such as ammonium sulfate or nitrate, which scatter light and vaporize during analysis, have only a negligible effect on the determination of EC. Errors result only if the concentration of such non-absorbing inorganics is very high (>100 microgram/sq. cm) and the concentration of EC is very low.

August 31 - September 4, 2020 We welcome you to join us at the first ever European Aerosol … END_OF_DOCUMENT_TOKEN_TO_BE_REPLACED

October 5-9, 2020 Come see us in our virtual booth during the 38th Annual AAAR Conference this … END_OF_DOCUMENT_TOKEN_TO_BE_REPLACED

Talk to a Sunset Laboratory Representative